Straight to the heart of the Park!

If you've only got a half-day to spare, or if you don't really want to commit to a full-day of paddling, the Marine Reserve Express is the trip for you!

A reluctant start to an awesome day!

I’m lucky enough to have a bunch of friends who like getting out into the great Kiwi Outdoors. So when I need to do some filming, I’ve got some ‘talent’ ready for their starring role in my footage. Sometimes that talent can be a little bit hesitant in the beginning, particularly if we’re getting an early start.

It’s fair to say the mood on the evening before Tegan and I headed off for our Magical Marine Express kayaking trip with Marahau Sea Kayaks wasn’t exactly one of excitement. Leaving Richmond at 7:30am in order to get to Marahau at 8:30am for our trip briefing was not an inviting prospect for Tegan. Phases like “Jade what have you gotten me into?!” and “What do you mean we have to get up at 7:00am?!” were being muttered and I wondered if an afternoon paddling mission may have held more appeal. However, as the sun rose so did Tegan’s enthusiasm and excitement for the day ahead.

We began the trip by meeting our guide Suria and found that we would be joined on the trip by a French woman. As Suria organised our kayaks and gear we all chatted, and despite the language barrier, became fast friends. We were soon on our way from Marahau on an AquaTaxi up to the northern beach of Onetahuti. Our water taxi skipper provided some interesting stories and history about the Abel Tasman including showing us the world famous Tree Penguins that roost in the trees next to Split Apple Rock. (There are no such thing as Tree Penguins, although many visitors have mistakenly and excitedly identified Shags/Cormorants as penguins.)

By this point in the morning Tegan was upbeat and happy to be out in the Park on such a beautiful summer day.

Once we were in our kayak we paddled directly out from Onetahuti to Tonga Island which is home to a colony of kekeno (NZ Fur Seals). Suria explained that December is the middle of their breeding season so there were plenty of big male seals around. It was awesome to see their sleek bodies dive in and out of the water as they explored and cooled off in the sea. After paddling around the Island we headed over to Mosquito Bay, which despite the name, is actually stunning. Kayaking through the tranquil estuary was magic, the water and sky were perfectly clear.

We then paddled around a headland to Bark Bay, where we all sat together for lunch. We lay on the beach and went for a swim at which point time seemed to speed up because before we knew it our 12:45pm AquaTaxi had arrived to take us back to Marahau. An Ice Cream from the Abel Tasman Centre was the perfect end to a perfect day. Tegan’s huge smile as she tucked into her ice cream made the early morning completely worthwhile. 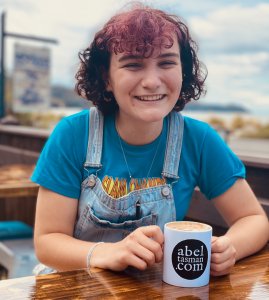