Golden Bay: One of my happiest of happy places

Whenever we’re looking for a short break we find ourselves drawn back to Golden Bay time and time again. And the more time I spend on the other side of Takaka Hill the more my love affair with all things Golden Bay seems to grow. 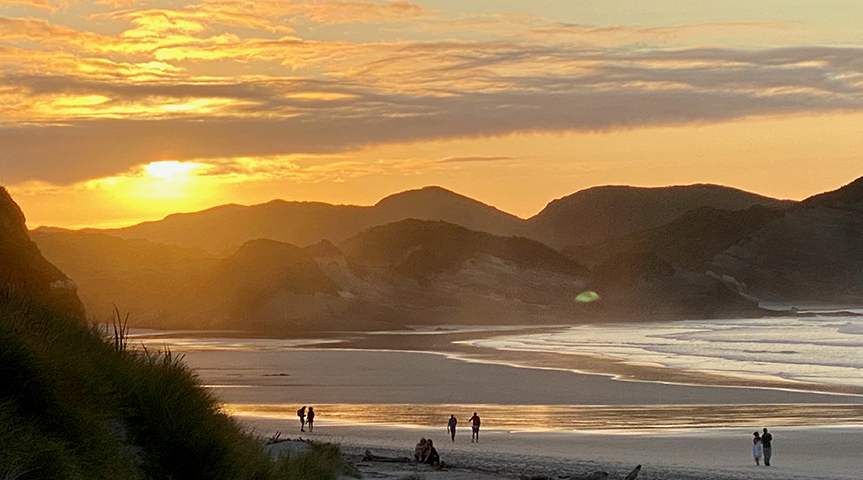 For our most recent trip, during the last two weeks of January 2020, we wanted to go to an area of Golden Bay that we hadn’t spent a lot of time on previous visits. We left home in our camper van so as to reach Takaka in time for lunch. Our first stop whenever we hit Takaka (which we always schedule to coincide with a meal time) is invariably Dangerous Kitchen for pizza. Specifically the organic beef pizza with extra chilli. If you pair that pizza with the Hop Federation Red IPA you will have achieved the equivalent of a Michelin Star dining experience without the expense or the pretentiousness.

We had pre-booked ourselves in for the first two nights at Wharariki with the intention of making our way south, back towards Takaka over the next two weeks. To aid the digestion of the aforementioned pizza we walked the short distance from our campsite to the Wharariki Beach. This isolated, dramatic and often wind and sand-swept beach became even more iconic after Microsoft used it as the background image for Windows 10. From Wharariki Beach a well signposted track takes you along the cliff tops to Cape Farewell, Pillar Point and eventually to the beginning of Farewell Spit. The track has a few reasonable climbs and is a bit of a scramble through sheep-poo-minefield farmland. The views of the rugged coast below are breathtaking and the trees growing at an angle leaning away from the prevailing winds indicate the weather can be hostile for a big chunk of the time. For the next few evenings we wandered back down to Wharariki to watch and photograph the amazing amber sunsets.

Puponga, a whole 5km back along the road, was our next camping spot. Farewell Spit Gardens is a little gem of a camping ground. It’s located an easy walk to Farewell Spit and a delightful tidal inlet perfect for swimming and a spot of fishing. I hooked one kahawai but dropped it before I could get it onto the beach. A local guy fishing just along the beach must have seen the disappointment in my eyes at losing ‘the one that got away’ so kindly gave me one of his kahawai, which I gleefully used in a Tahitian-style ceviche.

Our next camping site was also a short drive away, back at Pakawau Beach Park to the south. After the warm old-school Kiwi welcome from Gary as we checked in we knew we were at the sort of special location that keeps families and friends coming back, year after year for their annual beach holiday. We secured a beachfront site for our camper van and knuckled down to the gruelling daily routine of swimming, reading, playing cards, cooking simple meals on the bbq and drinking refreshing craft beers. On about our third day the westerly wind whipped up, threatening to flatten the sleeping-annex of our mobile camping facility: My tramping tent. This particular tent, an ultra lightweight MSR NX Hubba Hubba, has never let me down, even in the most demanding conditions on the side of some remote and blustery mountain sides, but the westerly was threatening to blow it out to sea.

After three relaxing days at Pakawau we moved to a camping ground that we have stayed at many times during our previous visits, Golden Bay Holiday Park. En route we stopped for our second visit to the Courthouse Cafe in Collingwood for another fantastic coffee.

Located just along from Collingwood between Parapara and Onekaka, our new camping site is accessed down a wonderful narrow country lane. This little lane has recently become even more wonderful with the addition of the phenomenal Bacca Bakery producing some of the best sourdough bread you’ll find anywhere on this planet. Further along the lane is the new Tukurua Collective, combining a yoga studio, artist gallery and coffee. With the long established Living Light Gallery right next door, it’s well worth the short drive down the lane even if you’re not planning on staying in Tukurua.  Located a couple of km past the turnoff is The Mussel Inn, a Golden Bay institution with a vibe all of its own. If you drive past this place without stopping in, even if only for a drink, well you’ve really let yourself down!

In stark contrast to the strong westerly winds we’d left behind at Pakawau, Tukurau was calm and positively balmy. We settled into our site one row back from the beach grateful for the shade provided by the mature trees.

On a previous visit I had discovered, via a friend, an awesome running/mountain biking track up behind Tukurua which winds up into the Kahurangi National Park. It also drops down from the ridgeline to the site of an old mine and a cute little lake. The hill is a grunt but the low tracks are wonderful and eventually wind their way out to the Parapara Valley Road. As I ran along that road I stumbled across artist studios I’d never even known were there. It was a good reminder that Golden Bay is chock-full of creative types with their studios and galleries lining even the most remote country roads.

After several days of relaxing we ventured away from our campsite for a day trip. Our first stop was Top Rock for a refreshing dip, the fabled swimming hole close to the better known Paynes Ford. Still in our togs we drove the short distance to Anatoki Salmon Fishing to catch ourselves some lunch. It seemed like the salmon in the pond had wised up to the perils of fishing since our last visit so it took us a while for us to catch the three salmon we were after. We then had two of the fish hot smoked with different flavourings and ate the third one raw with soy and wasabi.

After a few more days of the van-life cycle (breakfast – coffee – run – swim – read – lunch – tactical kip – swim – read – bbq & beers – cards – sleep) it was time to head home. En route we stopped at the Te Waikoropupū Springs, yet another Golden Bay ‘must-do’ because of the wonderful short walk through the native bush and to see the famous turquoise springs themselves.

It was mission accomplished: We had explored a part of Golden Bay that we hadn’t previously lingered for long enough in and I had relearned, for the umpteenth time, the sheer joy of doing very little. Brendan has a 20 year association with the Abel Tasman, visiting it for the first time when his parents moved to Marahau in 1997. After spending much of his life overseas, Brendan and his family moved to the area at the end of 2010. When Brendan is not spending his time in the outdoors he seems to spend much of his time creating even flimsier justifications for spending more time in the outdoors.